It’s been a while since we did a showcase post introducing a Walls.io client’s hashtag marketing campaign. But, now that summer definitely over, we want to get back to that. One campaign that caught our eye is #BeTheWhy.

Your job title doesn’t define who you are. You do. #BeTheWhy http://t.co/Fr0rYOQ47x

#BeTheWhy is a campaign run by the YMCA of Greater Toronto, a charity which aims to support and develop community, both locally and globally. The idea behind the campaign is to get people to share the why behind what they do, instead of reducing them to their job descriptions.

When looking at their social media wall, I was moved by statements like the following:

So, I talked to Laura Graham-Prentice, VP Marketing and Communications at the YMCA of Greater Toronto, to learn a little more about their #BeTheWhy hashtag campaign.

Could you tell me a little bit about the general idea behind the BeTheWhy hashtag marketing campaign?

BeTheWhy is an awareness campaign developed to increase the comprehension and relevance of the YMCA of Greater Toronto. The idea is to deepen public awareness and renew current member’s commitment for the work we do at the Y. It’s both an invitation and a challenge to take action, to embody what the Y stands for, for our staff to embody their own motivations.

The idea behind the #BeTheWhy hashtag is to allow an easy, accessible way for our employees to share their WHY. To create an emotional connection to the campaign and discover what they do every day has meaning.

We believe that we can’t tell our employees how to #BeTheWhy. Their commitment to the program must come from a personal understanding and belief, rather than an externally forced mandate. By participating in the program, employees are invited to contribute to the purpose, meaning and final outcome of the campaign, so that they feel personally invested, as co-creators and thus feel a vital part of its success.

So, is it a public or, rather, an internal campaign?

It’s a three-phase project, with the employee engagement program kicking off the campaign. #Bethewhy is aimed at creating an internal buzz with our staff that will challenge them to think about why they work for the Y and how they’re helping create healthy communities through their commitment to this charity. By building brand ambassadors, this program is preparing our employees for a public launch.

What are you looking to achieve with the campaign?

The objectives of the program are:

How and where are you promoting the hashtag?

The hashtag is currently being promoted through our internal channels: In our weekly email communications, our intranet, on posters, and in our Facebook group.

The idea is to have all our employees share their Why using the hashtag and when we launch to the public, we’ll run a Thunderclap to spread the word even further.

Are you displaying the wall somewhere physically?

The intent is to create a real-life wall when we launch the member/public campaign to further increase the pride of our employees, but those details are still being ironed out.

Awareness Hashtag Campaign: Involve employees to take it from internal to public

#BeTheWhy is a pretty unique campaign in that it is aimed first at employees, pulling them into the greater story, before going public. A smart move, because happy and involved employees definitely make the best brand ambassadors to the public.

By using a hashtag from the get-go, the YMCA is facilitating the jump from internal to external campaign. Employees are already sharing their posts publicly, exposing friends, family and followers to the hashtag. The messages are something positive, which people love to share. Interest is sparked, and the campaign already begins to spread and create buzz while still officially in its internal phase.

The emphasis on emotions seems to work excellently at drawing people in. Pride in one’s place of work is not generally something one sees on the internet often. So, seeing posts by employees who are happy with their employer sparks interest in the charity in general and as a place of work. 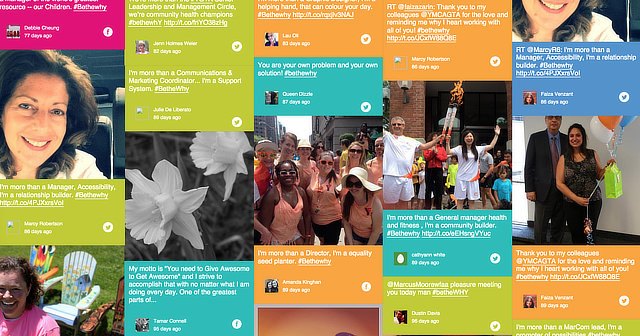 I once heard that, when introducing yourself (e.g. at a networking event), you shouldn’t primarily tell people WHAT you do, but WHY you do it. Well, the YMCA of Greater Toronto has pretty much proven that this is a valid piece of information.

I hope you enjoy browsing #BeTheWhy on Walls.io and that the posts will inspire you to think a little about why you do what you do. Tell me all about your own WHY in the comments!