Case Western Reserve University is a private university in Cleveland, Ohio, which counts 16 Nobel laureates among its alumni. Despite being a university with a long-standing tradition, it doesn’t shy away from employing modern methods to keep students, staff and alumni engaged.

Case in point: the two-storey multimedia wall at the heart of the CWRU campus that serves as a communication hub and features the university’s social media walls.

The heart of the CWRU campus is the Tinkham Veale University Center, opened in 2014. Lovingly called “the Tink” by staff and students, this hub houses multiple campus departments, university offices and various event spaces.

Just inside the entrance is a huge media wall — a two-storey, multi-touch video wall that is used for various communications. For a few years now, the multimedia wall has also been home to the university’s two social media walls. The university wants to bring the campus together not just physically in the “Tink” building but also virtually with the help of social media.

We talked to Jason Hawk, Director of Sales at the Tinkham Veale University Center, about what the social media walls are doing for CWRU and what he and his team have learned in the past years of using social walls.

Director of Sales at the Tinkham Veale University Center

What are you hoping to achieve by using social media walls and hashtags?

Every department on campus is posting cool and interesting content on their events and research. Our building is the Tinkham Veale University Center and is somewhat of a central hub for the whole campus. Since so many people pass through our building, we wanted a way to display all of this information to them in an innovative and relevant way.

Our media wall, on which our two social walls are displayed, is designed to keep the Case community informed and connected to all that is happening on campus and in the greater Cleveland area. It’s the very first thing you see when you walk into the “Tink”.  We feel that the social walls are the perfect way to enact the mission of the Media Wall.

Your media wall looks absolutely gigantic! Can you tell us about the setup?

And since the Tinkham Veale University Center is a LEED-certified Gold building, the entire wall was designed to only use 5,800 watts of power which is quite impressive for its size.

The wall is fed information from a laptop that we have stationed in an AV room.

We have placed our Walls.io walls on the Beacon portion of the wall so that they are striking and visible. There are a lot of departments on campus that post interesting content, so we need two walls to just scratch the surface. We also wanted to include hashtags that are from Cleveland as a whole.

Schools can use social media to promote events, make announcements and engage students to share their experiences with the world.

You’ve set up a lot of sources and are getting a lot of content. How are you handling moderation of your wall?

The moderation of the wall is an ever-changing process. When we began, we were under the misguided belief that the wall could operate with automatic approval of all the sources we had listed.

Within 4 hours of our launch, we learned that the content would need to be manually approved; after all, we are on a University campus with students.

We’ve delegated our moderating responsibilities to multiple people. Curating the content that goes on the wall can sometimes be time-consuming. Having multiple people approving posts helps save time for staff and means that our wall is regularly refreshed.

If you want to have a lot of different sources on your wall and/or are dealing with a potentially volatile group of users, i.e. students, the Walls.io manual moderation can help you keep your social media wall “on brand”. It’s more work than letting it run on auto, but you’ll be rewarded with a perfectly curated social media wall.

Has the way you use the social walls changed over time?

When we first launched the Media Wall, we posted a printed sign at the base with instructions on how to have posts displayed. We’ve since removed that sign, but we do use a header bar with instructions for new students or guests.

We also host all of the University’s Open House events and developed a designated hashtag for prospective and admitted students to post about their experiences while on campus.

We did update the visual style of our wall as well. Initially, we took advantage of the grid format’s ability to match every individual display. The result was 32 pieces of content on the screen at once. After some assessment, we had to admit it was a lot for anyone to digest.

So we made some modifications to the grid and now display eight pieces of content at once, each using four displays. We increased the font size to make messages more legible and with the help of Walls.io support staff, added a piece of code to the wall that modified how images were displayed. In its current configuration, images now fit within the context of the frame versus expanding and potentially cropping an image incorrectly.

How has the social wall impacted your marketing strategy?

This is the first time the “Tink” has used any sort of social media wall. It has been a success and has affected the way we market, and the way other departments market. We quickly got a lot of requests from all over campus, asking to display certain department accounts or hashtags.

The Media Wall is also a nice selling point for conferences or workshops hosted in our venue. Oftentimes, these large events have a designated hashtag. We incorporate these hashtags into the wall and event organizers love seeing content show up that’s specifically about them and their guests.

Over the entirety of this project, we’ve updated our sources periodically. Having these new sources meant new types of content. Plus some of our content providers now create posts especially with our Media Wall in mind. While they may have previously just posted a simple tweet, they now attach a photo or video knowing that it will be more dynamic when it shows up on our wall.

When Instagram changed its privacy policies, it did have an impact on the content. A lot of student organizations on campus would post things like “Join us for our event”, but they didn’t indicate who they actually were. With the new privacy rules in place and the names of the content providers no longer available, it was a bit confusing at first. The great thing is that students tend to be fast learners and are adaptable. They made some changes in their advertising and people were able to identify who the content was from.

Instagram implemented some API changes which seriously affected how Walls.io and other third-party tools display posts from Instagram. Among other things, we cannot show the names and handles of users on our social walls anymore; it just says “Instagram user”. If you’re looking at a wall on a device you control, you can check who posted a picture or video by clicking on the post. But on a social wall that is displayed on a big screen, like the CWRU walls, spectators don’t have that option. This is why CWRU departments had to adjust when the API was changed.

Social walls aren’t a set-it-and-forget-it kind of tool. They work best if brands keep evaluating what works and what doesn’t and adapting their social walls accordingly. It’s easy enough to swap out sources for better ones or change the design of the wall, for example, to make it easier to read from afar.

CWRU has done just that, by playing around with font size, tile placement and content, to continually improve the two social walls displayed in the Tink. 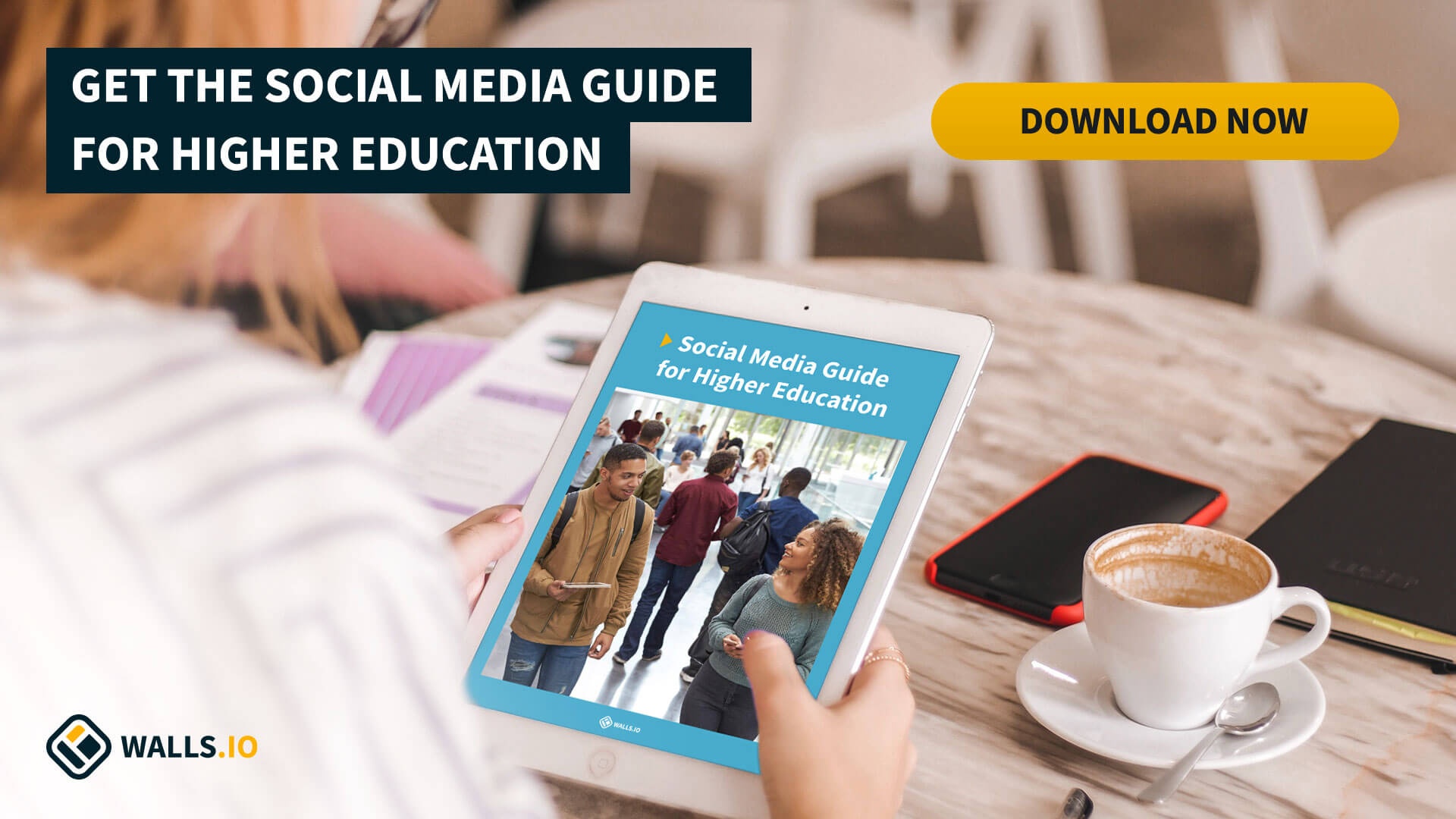 Integrate social walls into your marketing

The university has also made Walls.io a flexible part of its marketing by adding sources based on in-house happenings, like conferences, events, etc. Other departments have adapted accordingly by providing social media content that is more suitable and interesting for the display in the Tink.

But CWRU takes it a step further by actively using the social walls as a selling point in outside marketing. The space can be rented for various events, and those events then get to use the media wall as well, by having their own social media sources temporarily displayed on the social walls.

Manual moderation can be your friend

CWRU has chosen to add a large number of accounts, keywords and hashtags as sources for the social walls to include a large proportion of the CWRU campus and off-campus happenings as well. To counteract the huge amount of posts coming in (and to prevent any abuse of the hashtags), the CWRU team is putting extra effort into moderating and approving posts manually.

If you have to set up manual moderation, split the job between a handful of people to mitigate the impact this has on everyone’s workload.

It takes commitment to do this, but using a large variety of sources and then moderating by hand allows CWRU to showcase the diversity of posts being shared all over such a large university.