Life Ball, founded by Gery Keszler in 1993 and organised by non-profit organisation AIDS LIFE, aims to fight the prejudice and stigma still associated with HIV/AIDS around the world. Its way of doing may still be an unconventional one – it raises donations by celebrating life with exuberant festivities; A different kind of ball in Vienna, a city known for its more traditional Ball Season. 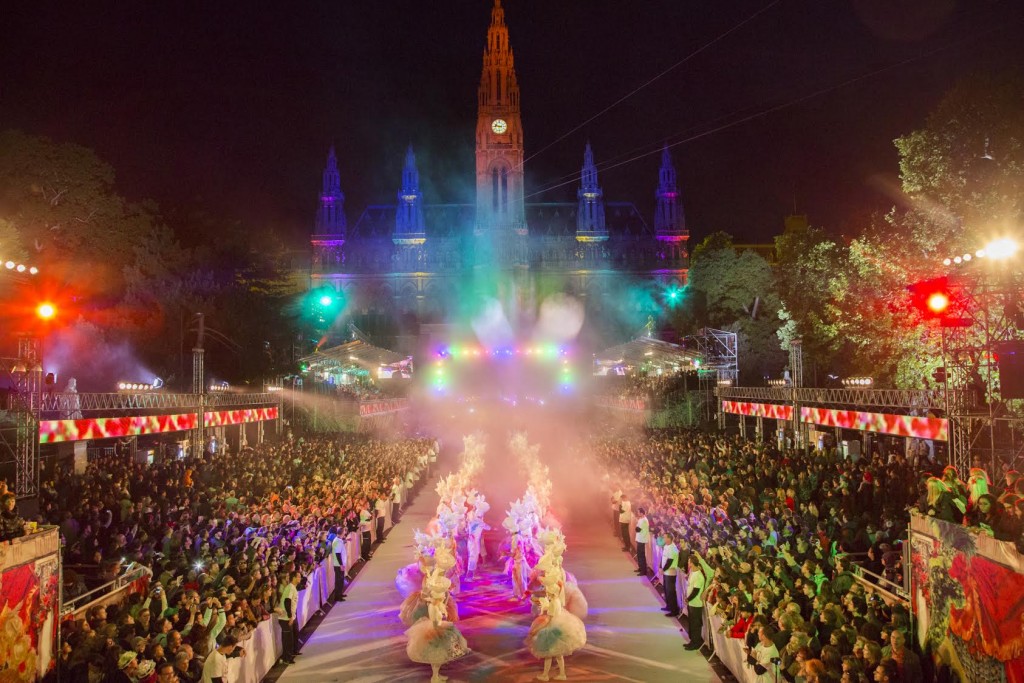 As every year before, Life Ball 2015 will happen in and around the Wiener Rathaus (Vienna City Hall) and will be enriched by various events surrounding the main ball. This year’s celebration will happen on Saturday, May 16 under the theme “Gold – Ver Sacrum”, inspired by the ancient Roman spring festival of the same name.

The Life Ball Party itself will take place behind the closed doors of the City Hall, accessible only to those holding a ticket and will feature a Life Ball Fashion Show by Jean Paul Gaultier and this year’s special guest actress Charlize Theron. However, there will be plenty to see even for those who don’t have a ticket, thanks to the public Life Ball Opening Ceremony, a spectacular two hour event on the Vienna City Hall Square. Spectators will get to experience the Opening Show on the stage as well as a parade of the most extravagant costumes and the most renowned guests as they walk down the Magenta Carpet.

Fortunately, not even those staying at home can miss the event of the season. Thanks to the Life Ball and Walls.io everyone can follow the festivities and gawk at the mangificent costumes via a social wall on their computers or mobile devices. We’ve talked to Nicole Ustupska, Social Media Manager at Life Ball 2015, about how they will integrate their hashtag #lifeball into the event:

Is this the first time you’re “going hashtag” and what has inspired you to officially collect all #lifeball posts on a social wall?

This is the third time we’re using our so-called “Life Wall” to present all social media interactions around to the Life Ball in real time – the social wall will feature Twitter and Facebook posts from all over the world as well as Instagram photos and videos –, making this the third year the #lifeball hashtag proves effective. It’s very important to us that thanks to the Life Wall the festive mood of Life Ball 2015 can reach all fans, no matter where in the world they are. To facilitate this we have also integrated the wall on our website lifeball.org.

Are you actively promoting the hashtag (and where) or is the use implied with an event the magnitude of Life Ball?

By now, #lifeball is an established hashtag in our growing community on Facebook, Twitter, Instagram etc., so we don’t even have to do all that much to promote it. Leading up to the event, a lot of people are posting their costume ideas – or even finished pieces – using #lifeball to share their excitement about the perfect outfit with other fans.

Are there any plans for integrating social content live at the event on May 16?

There will be a huge physical wall, hosted by Red Bull, in the Arkadenhof of the City Hall. This wall will show the most creative and most beautiful pictures from all around the world, embedded in specifically designed visuals and projected onto our biggest stage, the “Heaven”. There will also be digital screens all over City Hall showing the original Life Wall as it can be seen at wall.lifeball.org. This way people can post pictures from the event and immediately find themselves on the wall.

Will the organisation team even have time to post from the event and what is your preferred platform?

The team is usually non-stop in action during the event, so we have outsourced our content management to buzz marketing agency ambuzzador. They will be in the midst of things, telling the stories live from all event locations and making the events tangible for all those who can’t attend personally. It’s extremely important to us to stay in constant touch with Life Ball fans all around the world, all weekend long. After all, the Life Ball’s mission for acceptance and solidarity for those affected by HIV/AIDS should transcend borders. To emphasise this we will also be providing a live stream on YouTube. This way, even our fans outside of Austria can follow the Opening Ceremony as it happens.

By heading over to wall.lifeball.org you can already follow the preparations and experience the pre-ball buzz, as well as follow the posts from the event itself this Saturday. You can also check out the #wieichwill hashtag for a competition featuring videos by artists creatively presenting their wishes for a society free of prejudice. The hashtag campaign was initiated by T-Mobile Austria, one of Life Ball’s biggest sponsors.

But let’s not forget the most important part of Life Ball: You can donate to the cause on the Life Ball website! And remember: It’s important to give year round.

We hope that you will experience a magnificent Life Ball 2015 – no matter where in the world you are.