Wheelmap is a community-driven app that lets anyone evaluate the wheelchair-accessibility of public locations so that users can benefit from each other’s experiences. The app is accessible in a browser, but there are also apps for iOS and Android, so people can easily add and mark new locations on the go. Accessibility information helps wheelchair users, but also those out and about with prams or on crutches.

Supported by the World Health Organization and celebrities

Now, the people behind Wheelmap, the German nonprofit organisation Sozialhelden (lit. Social Heroes), have launched their #MapMyDay campaign. The “mapathon” ties into the existing Wheelmap and aims to motivate as many people as possible to share and mark locations on the map.

#MapMyDay, which started at the beginning of December and will run until December 17, is backed by the World Health Organization (WHO) and has many celebrity supporters — both disabled and able-bodied — in Germany and elsewhere.

We’ve had a chat with Andi Weiland, Sozialhelden’s press officer, about launching #MapMyDay and what they hope to achieve with this campaign.

Could you tell us a little bit about the idea behind the #MapMyDay hashtag campaign?

We want to achieve two things with #MapMyDay. We want to gather as much information as possible on the wheelchair accessibility of places around the world. We are calling on people to use Wheelmap.org to mark the places they go to, according to whether those places have a level access or steps at the entrance. With this information daily life can be made easier to plan for people who use wheelchairs, walking aids, or who have a child in a stroller or a leg in a cast.

We also want to raise awareness for one of the great challenges that people with mobility impairments are faced with every day: The inaccessibility of public places in our communities. Getting people to think and talk about accessibility is an important step in ultimately changing attitudes, which can lead towards our communities truly being for everybody.

How is the World Health Organization involved in the #MapMyDay project?

The idea for the global mapathon and the campaign leading up to it were developed in cooperation with the WHO, who, along with other Geneva-based UN organisations, is supporting us with their international expertise and networks.

What’s the story behind Wheelmap?

We launched Wheelmap.org five years ago because we know how difficult it is to find readily available information on the wheelchair accessibility of those places we all want, or need to, go to. If you want to meet your friends in a café as a wheelchair user you need to know in advance if you can even get in the door.

So we thought, “There should be an app for that!” and developed Wheelmap.org. The map, which you can use in a browser version or as an app, is based on the world map OpenStreetMap to which everybody everywhere can contribute.

How does the Wheelmap app work?

Wheelmap is very easy to use for anybody who has internet access: The online map shows you places nearby with either a green, yellow, red or grey marker. “Green” places have a level access and accessible rooms. “Yellow” places might have a very low step at the entrance or a few inaccessible rooms, and “red” places have one or more steps at the entrance, making them completely inaccessible.

Places that are marked grey are the ones where we need locals to help out with their knowledge. Everyone can assign grey places a color, with just a couple of clicks. The week before the global #MapMyDay mapathon Wheelmap.org attained its 600,000th location, firmly establishing it as the world’s largest database on wheelchair accessibility.

Where are you promoting the hashtag and the campaign?

Over the course of the last several weeks, we have written to organisations, individuals, businesses, government authorities, educational institutions and media all over the world to tell them about the campaign. 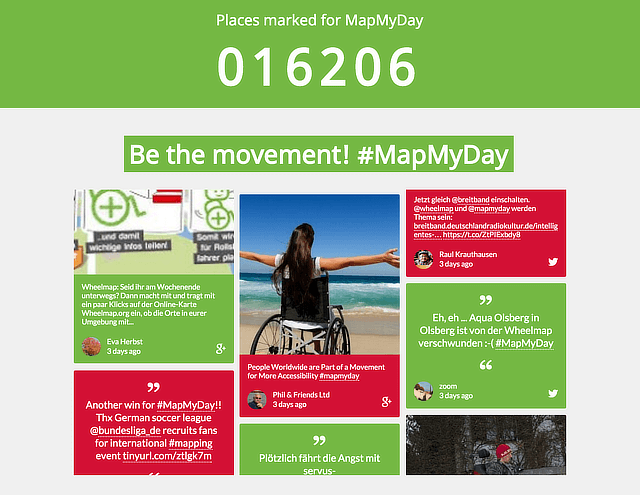 The campaign website mapmyday.org has a social media toolkit for promoting the campaign. We have sent out press releases and used all the social media channels associated with our organisation and our partners to promote the hashtag and the campaign.

The campaign has its own Facebook page and Twitter account which are also getting the hashtag out there. Of course, we are using the hashtag vigorously ourselves, and on December 3 #MapMyDay was among Twitter’s trending topics in Germany almost throughout the day.

The #MapMyDay campaign is still running for another week. I think we should all take this as an opportunity to pay more attention to the accessibility of locations. So, download the app for Android or iOS and mark a place the next time you go out.

How is accessibility handled where you live? Do you pay attention to these things? Let us know in the comments or on Facebook/Twitter.