“Show me a photo of your healthy meal for a chance to win a meet and greet as well as tickets to the Super-G in Hinterstoder.”

Those were the words that kicked off the UNIQA Star Challenge on January 7, 2016. Skiing star Marlies Raich (you may still know her as Marlies Schild) motivated her fans to eat healthy and post about it using the hashtag #MarliesChallenge.

A further incentive was the chance to win tickets to the Super-G race in Hinterstoder, as well as a meet and greet with her and her husband, fellow alpine skier Benni Raich.

Marlies’ challenge lasted for two weeks and was succeeded by three more challenges, all set by famous Austrian skiers. The last of the four challenges starts today at uniqa-starchallenge.at.

The driving force behind the hashtag campaign is UNIQA, an Austrian insurance provider. We had a little chat about the ideas behind the campaign with Martin Lungau, Creative Director at holzhuber impaction, UNIQA’s social media agency:

Could you tell us a little bit about the idea behind the UNIQA Star Challenge?

One of UNIQA’s main focal points is healthcare. Star Challenge is part of a concerted effort to animate people to live healthier lives.

Over the course of eight weeks, four well-known Austrian skiers challenge users to improve their lifestyles by setting them tasks revolving around nutrition, fitness and mental strength — all healthcare topics. User can complete tasks by posting photos or videos on Facebook or Instagram, using the relevant hashtags (#MatthiasChallenge, #MarliesChallenge, etc.). 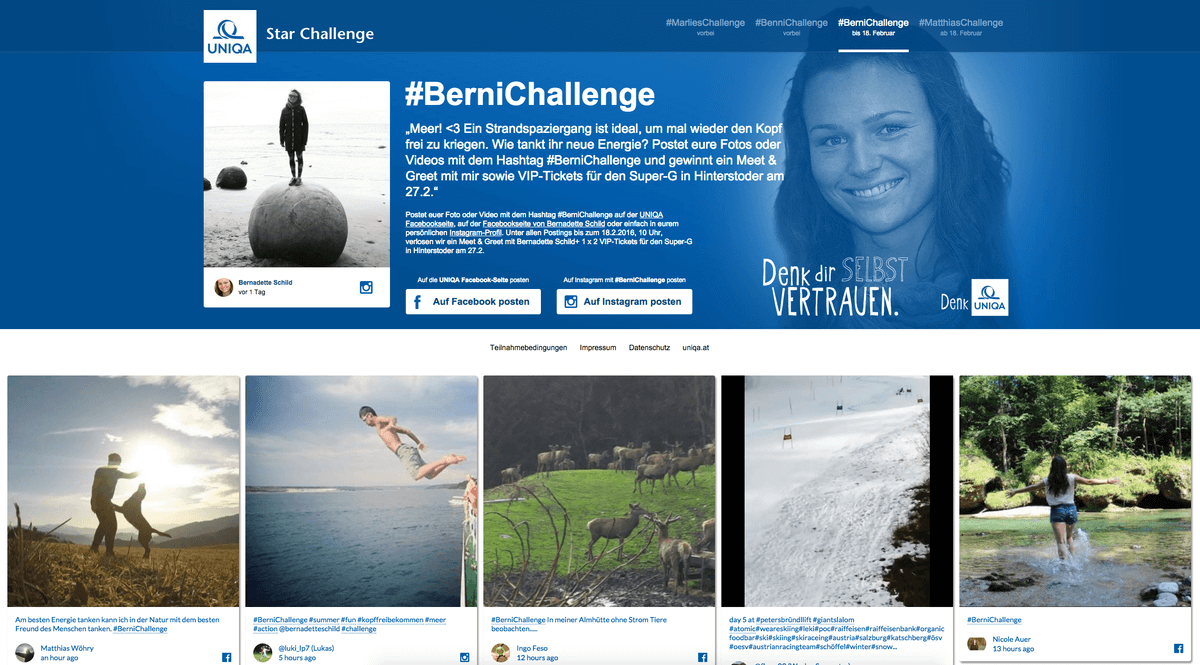 The idea is for the four alpine skiing stars — Marlies and Benjamin Raich, Matthias Mayer and Bernadette Schild — to function as role models for healthy living. Three challenges are already done, each having lasted for two weeks. The last one starts today.

How and where are you promoting the hashtag(s)?

We posted content as well as ads on all of these channels. And to really motivate users we used raffle prizes as incentives to take part in the challenges.

Are the athletes themselves getting involved on social media?

The skiers didn’t just post away on their own social media channels, but also took part in their colleagues’ challenges.

Where are you using the social wall?

We used a separate social wall for each challenge. All four walls are embedded on uniqa-starchallenge.at.

How To Make Your Hashtag Campaign Work by Engaging a Spokesperson

The UNIQA Star Challenge shows how you can give your hashtag campaign an extra boost. For instance, if you are collaborating with a celebrity, the best thing you can do is to get them to support and promote the campaign on their own channels.

Instead of you doing all the work on your own, you are now working in unison to get the most out of the campaign. The celebrity is activating their own fan base and thus helping you build reach past your usual crowd on social media.

Furthermore, if your brand and the celebrity’s brand fit well together you stand a chance of gaining some of their fans as your fans. So, pick your spokespeople wisely and work hard to set up a coordinated PR, advertising and social media push that takes into account both your and the celebrity’s channels.

Of course, make sure to feed all of the accounts into your wall by adding them in the Walls.io settings! 😉