Offer incentives! That’s the advice we usually give for hashtag campaigns that ask people to submit user-generated content. And it’s true. Competitions and giveaways drive engagement. And so does the simple act of acknowledging and appreciating content submitted by users, by thanking them or resharing their content.

Another factor is easily forgotten, though. And that’s the feeling of simply having done something good by creating and submitting content to a hashtag campaign.

The #LebenIstErleben campaign by Austrian care facility Haus der Barmherzigkeit is an excellent example for a UGC campaign where the only reward is having done something nice for someone else.

Haus der Barmherzigkeit was founded in 1875 and has been a worldwide pioneer of geriatric medicine. Today, the group operates multiple nursing homes, geriatric hospitals and assisted living homes in Vienna and Lower Austria.

Asking for donations of experiences

#LebenIstErleben stands for “living is experiencing” and the campaign aims to improve the quality of life for people in long-term care. Instead of asking for monetary donations, the campaign asks people to donate experiences.

Many of the residents don’t get to go out and experience things they enjoy anymore because of their physical limitations. To make up for that a tiny bit, the campaign lets them live vicariously through other people.

The #LebenIstErleben campaign has been introducing nine residents at Haus der Barmherzigkeit and their hobbies, likes and passions in print, online and out-of-home ads. For example, there’s Anneliese who loves the ocean, Emre who loves cars or Friedrich who loves to cook.

Using the hashtag #LebenIstErleben, people post relevant content that fulfils each resident’s particular wishes — for example, short videos from their seaside holiday for Anneliese, photos of cars for Emre, etc.

The user-generated content is collected on a social media wall and on the website but also, in turn, integrated into the daily nursing routine with the residents.

The campaign started in June and will continue until mid-August. At this point, the project has already had more than 350 submissions and all that without offering the usual monetary or material rewards.

Where did the idea for the #LebenIstErleben campaign originate?

The idea originated to fulfil the wish of the client (Haus der Barmherzigkeit) to “tear down” their walls and build a bridge to the lives of potential donors. And there is no better place to spread an idea like that than social media.

The campaign was to highlight the “social” essence of social media, encourage people to make so-called “donations from the heart” and create a connection between the donors and the residents of Haus der Barmherzigkeit by demonstrating that no matter how old, young, healthy or in need of care a person might be, people can always relate and bond over shared passions and interests.

The things we love, the things we have in common with others are what bring us closer together and make life worth living. To collect these “donations” we created a microsite: leben-ist-erleben.at.

Why did you choose to work with the API instead of embedding the regular widget?

We chose to use the API because we needed the flexibility to customise the look of the social wall. The way content is displayed on the microsite is quite a bit different from the look of the wall on Walls.io.

The API made it incredibly easy to retrieve posts from Facebook, Instagram and YouTube. We then created the heart animation based on the Haus der Barmherzigkeit logo on the microsite and literally “filled it” with the user-generated posts.

You’re also giving people the option to post via an upload on the website. Why was this functionality important to you?

The younger generation handles Instagram and Facebook with ease. But the campaign is meant for everyone and we didn’t want to exclude anyone based on whether they’re active on social media or not.

It was important for us to offer a way of uploading content directly via the microsite. The uploaded contributions seamlessly integrate with the other content on the social wall.

How and where are you promoting your campaign and how have people been reacting to it?

The campaign is designed as a 360° campaign with a focus on digital promotion. We created multi-sheet billboards as well as electronic ones to tease the campaign and introduce the hashtag #LebenIstErleben. We placed ads on TV as well and, of course, placed banners and social media ads on Facebook and Instagram. 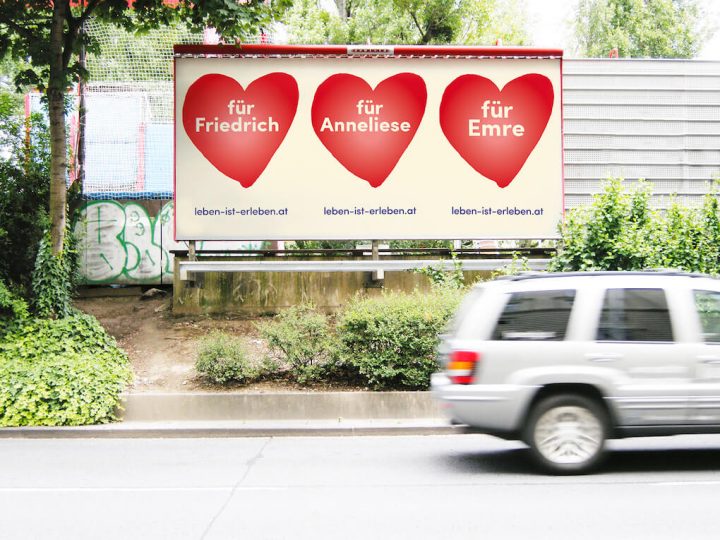 Even without a giveaway, the campaign has gained incredible momentum and encouraged many people to become a part of it. The nine featured residents and their passions are very different from each other, making it easy for users to find an emotional link to at least one of them, motivating them to take part.

Are you displaying the social wall somewhere else, aside from the website?

Our primary use of the social wall is the microsite, but we’ve also integrated it as a tab on Facebook using the Walls.io embedding function. Of course, the contributions are shown to the residents at Haus der Barmherzigkeit in person, as they’re who they are intended for. They’re so excited and happy about the posts they are receiving from around the world.

Bridging the gap for donations

The #LebenIstErleben campaign for Haus der Barmherzigkeit by WIEN NORD and Die Goldkinder is a prime example for how non-profits and charities can step up the game in the quest for donations.

The campaign bridges the gap between potential donors and the people who benefit from the donations. Thereby, the beneficiaries turn into real flesh-and-blood people, no matter how far away the donors might be. A material reward isn’t even needed to motivate people to donate.