Europe is finding itself in the middle of an ever-unfolding refugee crisis. It’s not a new crisis. In fact, it has been going on for years. But with the most recent shipwreck off the Mediterranean coast claiming the lives of potentially around 800 people, who undertook a perilous journey in the hopes of traveling towards a more hopeful future, the media coverage has risen. And so has the online chatter about the incident.

The hashtag #savethechildren is going strong in the wake of the Mediterranean’s worst migrant disaster, but some have initiated even more specific hashtags. Humanitarian organisations going by the name youngCaritas have teamed up in Austria, Germany, Switzerland and Luxembourg for #4refugees – an offline and online campaign building on their “The boat is full? Let’s build more boats” campaign from 7 months ago.

In September 2014 youngCaritas managed to encourage around 1.000 people to build paper boats, let them float, and then post a photo of it to their social media channels. On April 23, 2015 – timed to coincide with the EU emergency summit regarding the Mediterranean refugee disaster – youngCaritas again invited people to show their outrage by building and posting paper boats.

They even posted building instructions for the paper boats (in German): 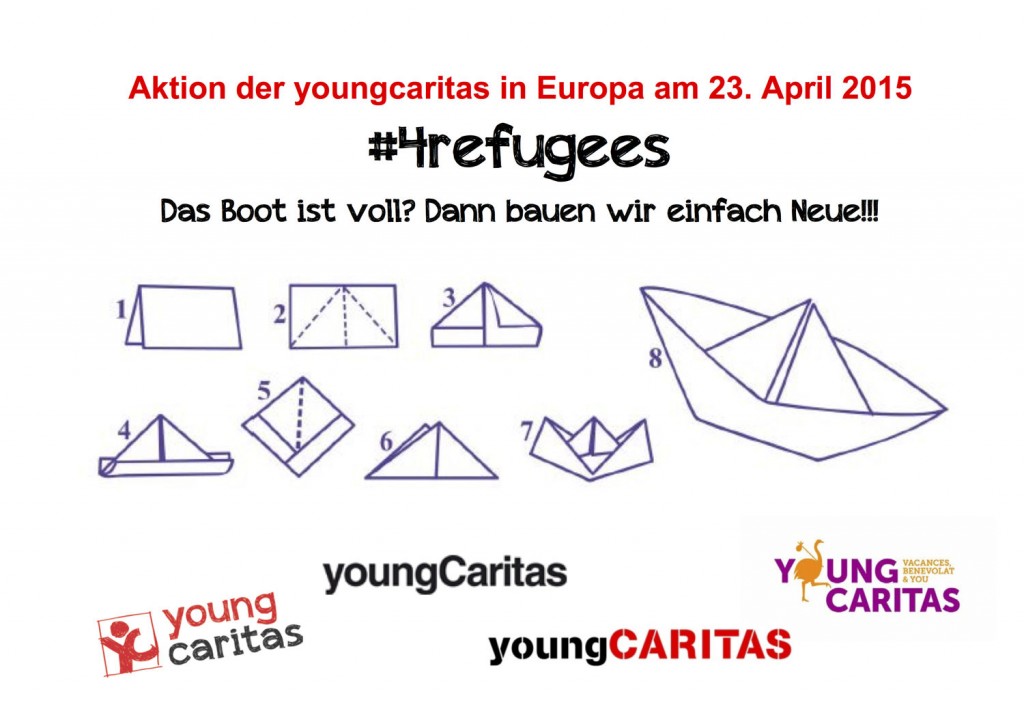 Meanwhile, for those who want to also take financial action for certain causes, a new UK service called #Pay is making it possible to donate to charity via Twitter – by tweeting or retweeting a hashtag which is registered with the platform. Charities simply sign up on the corporate #Pay platform, link their Twitter and Paypal accounts and, after verification, can set up one or multiple hashtags for their campaign. From then on the charity can receive donations via Tweets. On the other side, users have to link their Twitter and Paypal accounts as well before they are all set up to donate.

To make it more secure, donating via #Pay works with what is basically a double opt-in system. The user sends out a tweet naming not only the campaign hashtag and the amount they wish to donate but also the charity’s twitter handle, e.g. “I want to donate €5 to @charity #charityhashtag”. Then they’ll receive a reply from the charity and will have to retweet that. Only then will their donation go through.

According to The Good Agency, who have created the service together with #Pay, only UK charities can set up to receive donations at the moment. However, giving donations is not limited geographically.

@thegrumpygirl UK based orgs can use the technology to raise money but anyone can donate from across the world!

An end to Slacktivism?

This new service is a smart solution for turning online outrage into actual donations. Humanitarian hashtag campaigns often go viral. But, as we all know, what happens online very often also stays online. Those showing outrage online don’t automatically go and put their money where their mouth is. With less effort required, charities could potentially get more donations this way, posing somewhat of an end to the ever-present slacktivism. Furthermore, every payment confirmation comes in the form of a retweet and thus automatically markets the charity further.

However, the service of course doesn’t come free: Charities do pay a 5% fee to #Pay, as well as the deductions that Paypal takes. In the end one does wonder how much of the donation ends up with the actual cause at all.