Whether you’re European and call it football or American and call it soccer, whether you love the game or hate it* — you can’t escape it: the UEFA EURO 2016 is happening, and it’s happening soon (June 10 – July 10).

The Walls.io team has come up with something to make the experience so much more awesome for all you football fans out there.

*It’s not a secret that I’m not a fan of this particular sport, so I’ve created a little corner for those looking to avoid the EURO 2016. Please, proceed to the last section of this blog post to learn about all the wonderful alternatives to football!

The rest of you: carry on reading about everything you can do with our EURO2016 walls.

The Unofficial Social Walls for the Football Event of the Year 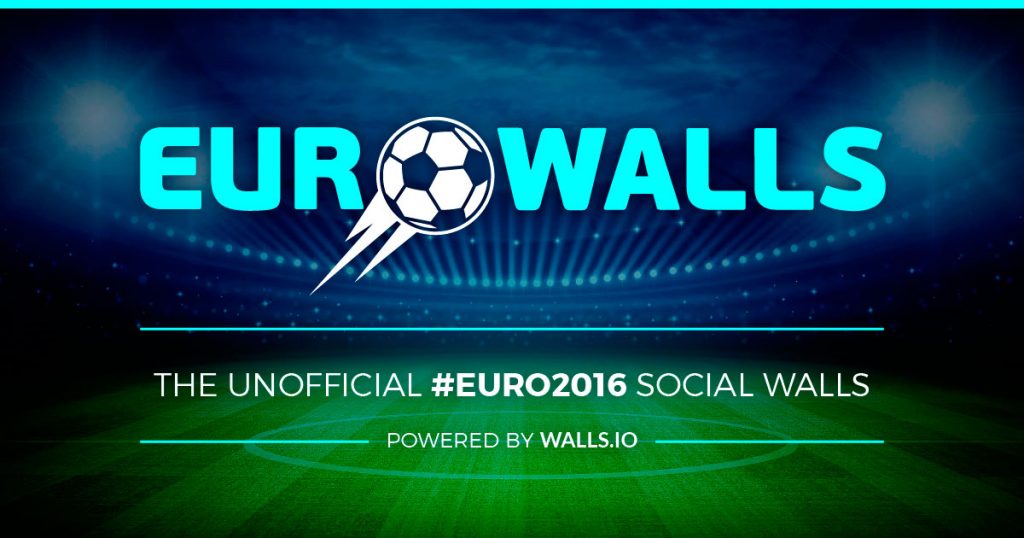 We’re excited to introduce EuroWalls, the unofficial #EURO2016 Social Walls. We will provide free social media walls for each game of the UEFA EURO 2016. The walls will collect all the posts, tweets, grams, vines etc. using the official match hashtags.

You can access the social media walls at the euro.walls.io microsite. We also offer a free embedding option for your own websites.

A Social Wall for Every EURO 2016 Match

On our microsite euro.walls.io you’ll see a dropdown for each game. Right now, we’re all set up for the group stages which are scheduled through June 22. We’ll be putting up the social walls for the round of 16, quarterfinals, semifinals and the final match as we go along.

The match dropdown shows the countries playing, the date of the match, as well as the official match hashtag, which we’ll use to collect social media content.

Each match page shows the flags of the competing countries on the side of the screen and the social wall for the hashtag.

You can also access the match pages directly by appending the match hashtag minus the #-sign to the microsite URL.Example: For Austria vs. Hungary the URL is euro.walls.io/authun.

Each of the match social walls is available in two themes. The Fluid theme is a classic social media wall. The content shows up in tiles, just the way you’re used to.

Our Map theme is one of our newer tricks. This theme turns your social wall into a social map! You’ll see the tweets, grams, vines etc. popping up on an actual map, showing the geographical location they’re being posted from. Our social map adds an extra layer to an international experience like the EURO 2016.

Embed a EuroWalls Widget on Your Website for Free

You can embed a match wall on your own website as a widget — for free, and it’s super easy to do:

This is your opportunity to check out the Walls.io embedding feature which is generally only included in our Pro and Premium accounts. Check out our blog post about embedding if you want to know more.

There Are Many Ways to Use EuroWalls 2016

We’ve compiled three ways that EuroWalls can accompany you through the exciting time of Euro 2016. I’m sure you can come up with plenty of other ways to use our microsite and widget.

Add a Layer to Your EURO 2016 Screening Party

One way is to use the EuroWalls microsite as an add-on for your screening party. Just set the microsite up on a second screen or using a projector and select the match you want. Then, watch your own and your guest’s tweets and posts pop up on the screen.

You won’t have to take your eyes off the match and you’ll still be tuned into everything that happens on social media regarding the match.

Never Miss a Game Thanks to EuroWalls

With 2 to 4 matches each day for the first 10 days of the competition, catching all games can wreak havor on your work and social life. And while it’s extremely disappointing that you might not be able to watch all matches, we thought we could at least make it a little easier for you to keep track of everything.

When, for some reason, you can’t watch a match, our Euro 2016 social walls will keep you up to date. You can even watch videos and GIFs embedded on the wall, without having to navigate away.

Obviously, we’ve never actually said this but: you could keep the social wall for the current match open in a browser tab or window while pretending to work. Just make sure you’ve got your keyboard shortcuts down pat or install a Panic Button extension for Chrome or Firefox in case your boss drops by your desk.

Don’t Miss a Single Moment No Matter Where You Are

Maybe you’re running late on your way to your favourite public screening. To stay up-to-date bring up the EuroWall for the match you’re looking for on your smartphone. Just, please, don’t use it while operating a vehicle. EuroWalls on mobile is for public transport only!

Or, maybe, you’re watching a game at your local pub, and all the beer you’ve had is putting some pressure on your bladder. As everyone knows, the moment you head off to the restroom is the moment someone’s going to shoot a goal.

You might be tempted to brave it out until the end of the game, but 90 minutes can be a looooong time, my friend. Thanks to our EuroWalls you can now race to the restrooms and still stay on top of the game. And you’ll definitely be the hero of the restroom queue as everyone tries to catch a glimpse at your phone.

Check out EuroWalls, get your widget for your website, and share our EURO 2016 microsite with your football-loving friends using the hashtag #EuroWalls!

Welcome to the Football-Free Corner!

Hello there, my fellow football-avoiding friend. I have bad news and good news for you: The bad news: EURO 2016 lasts for a whole month, from June 10 to July 10. The good news: You have plenty of alternatives to get you through the month.

Instead of Watching Football Go to a Music Festival

June 24–26, you can go to Glastonbury Music Festival and revel in the fact that they won’t be showing the football there. No tickets? Sadly, I won’t be going to Glastonbury either — again.

But, fortunately, we can all watch Glastonbury online. And, while I can’t give you anything as fancy as the EuroWalls microsite, I have at least thrown together a quick #glasto social wall for us.

Instead of Watching Football Get Caught up on TV Series

This is also a good time to catch up on TV. You could marathon Orange Is The New Black on Netflix, watch the first season of UnREAL or get caught up on Mr. Robot before the next season begins. Or, if you prefer a different kind of football, watch all of Friday Night Lights.

Instead of Watching Football Watch Some Movies

There are a bunch of movies hitting the box office this summer. Stay family-friendly with Finding Dory or stick with more adult animation with WarCraft. Go blockbuster with Independence Day and Now You See Me 2, sob your eyes out during Me Before You, and have a laugh at Daniel Radcliffe playing a corpse in Swiss Army Man. There’s plenty of movies to get you through the whole of EURO 2016.

You could also (re)watch one or all of these beloved films about sports that aren’t football: Love and Basketball, A League Of Their Own (baseball), Bring it On (cheerleading), The Mighty Ducks (ice hockey), Rocky (duh, boxing), Lagaan (cricket in India), Stick It (gymnastics is surprisingly hardcore!).

Instead of Watching Football Watch Other Sports

Surprisingly, football isn’t the only sport with a big competition coming up this summer — and I’m not even talking the Olympics here, just plenty of other disciplines you can watch instead.

There are a handful of Formula 1 races still coming up.

The NBA Playoff Finals are happening in June as well, and the WNBA season is in full swing. You can even get a season pass to watch the WNBA online.

If you dig tennis, Wimbledon is starting towards the end of June.

Golf fans can look forward to the U.S. Open in June and the British Open in July.

If you hurry up you could catch the end of the Stanley Cup Finals.

Oh, and then there’s the Tour de France, which starts at the beginning of July.

Instead of Watching Football Be a Rebel

You know how football players always occupy every field in every park in every city? Well, they’ll all be occupied soon and for a whole month to boot. So, reclaim your ground and use the empty football pitches and playing fields in your area to play something other than football on them.

But, before you run off to do all those wonderful things you can finally do, be nice and share our EuroWalls microsite with the football fans in your life using the hashtag #eurowalls! They’ll appreciate it, and maybe you can trade the information for their promise not to tell you about football. 😉

So, are you a football fan? I want to know how you’ll be spending your time between June 10 and July 10!