You’ve read our guides on running a hashtag campaign and have picked a hashtag that is unique, unmistakable and easy to understand. You’ve started promoting your campaign online and offline and the posts are rolling in. Now you would like to measure how well your hashtag marketing campaign is performing. Here are a couple of tools that can help you do just that.

In this first instalment we’re going to take a closer look at Ritetag, Keyhole and Twitonomy, three standard tools for tracking hashtags. In part 2 we’ll cover the hashtag campaign tracker Talkwalker in depth and show you some alternative ways of keeping track of your hashtags.

Most tracking tools give you an overview of top posts, top influencers, locations etc. So do these three, but they all have some unique features as well, and we’ll focus on those.

Ritetag: Learn how to choose the best hashtags

Ritetag has a unique hashtag grading system for tweets, which helps you choose the right hashtags. Ritetag pulls up tweets with your hashtag and shows you related hashtags and their grading. Hashtags are colour coded as either unused, overused, good, or great.

You can even create and schedule tweets within Ritetag’s “tweet coach”, which will teach you the finer intricacies of hashtags – how to optimise not just in regards to hashtags but also tweet length, emojis, etc.

Pricing: Ritetag offers a 30-day trial. Plans start at $10 per month and go up to $99/month. The differences between the plans regard mostly the scheduling and coaching features, i.e. the number of Twitter and Facebook accounts you can connect, and not the monitoring features. And only the upper tiers offer Bit.ly and Buffer integration.

Keyhole: Set up a tracking campaign with multiple hashtags and filters

The key feature of Keyhole is that it lets you filter your tracking more than other tools. When you set up a new tracking campaign you define up to five different hashtags, keywords, or URLs  and then use keywords to create sub-category filters. Similar to the Walls.io blacklist feature, Keyhole let’s you ignore posts from specific accounts or posts using certain keywords. 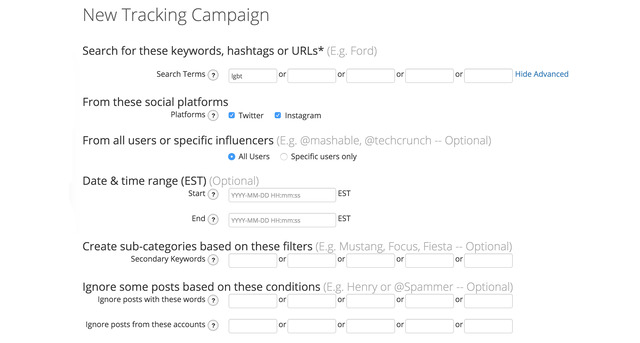 The important part is: You can only track future posts – so, you absolutely have to set up your tracker immediately when starting your campaign. Historical data can be specifically requested. This data will be expensive but will cost extra – how much depends on how far back you need the stats to go. We asked Keyhole to ballpark the costs, but they haven’t gotten back to us yet.

Pricing: Keyhole’s pricing system has 5 tiers, from $129 to a whopping $5.000 per month. Plans differ in the number of trackers you can run, the number of posts pulled per tracker, and the data storage time. From the Enterprise plan ($499) upwards you also get downloadable reports, phone support, advanced influencer insights and API access. The well hidden basic plan for $49 per month gives you 1 Twitter tracker, 3 search terms, a 30-day archive.

Twitonomy: Get insights into the quality of posts

As the name already implies, Twitonomy is an analytics tool for Twitter only. Twitonomy grants you insights into the quality of posts using your hashtag instead of just the quantity of posts.

To get access to the search feature and hashtag data you have to upgrade to premium. You get information on the number of users, potential reach and top influencers for the past 7 days. But, unlike other tools, Twitonomy differentiates between Top Influencers, those with the most followers, and Most Engaging Users, those having generated the most retweets and favourites. The latter is often a much better way to measure the quality and worth of a tweet. 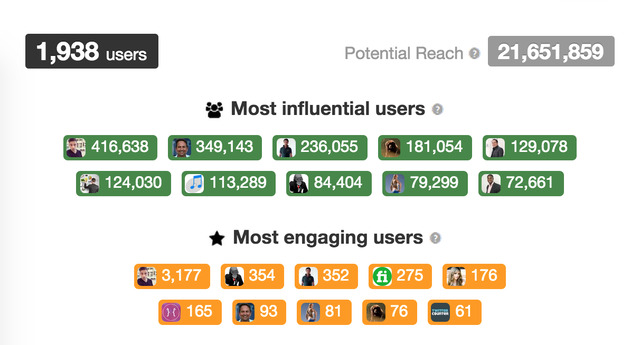 Pricing: Twitonomy pricing is relatively straightforward. You have the free version and then premium, which costs $20 for one month. It’s cheaper if you go on a monthly or yearly plan.

So, that’s it for the classics. Check out part two of hashtag monitoring tools.