In our first blog post about hashtag analytics we introduced you to a couple of straightforward hashtag monitoring tools. Ritetag, Keyhole and Twitonomy give you access to basic statistics and each tools has a unique feature that makes it stand out from the rest.

In this second part we’re going to take a look at Talkwalker, a very in-depth tracking tool for hashtag campaigns. We’re also going to show you how to track hashtags with IFTTT recipes.

Talkwalker is the most detailed tool we’ve tried, because it can monitor entire hashtag campaigns. The learning curve is a little challenging, but you can basically go to town monitoring all kinds of KPIs far beyond just hashtags: From brand chatter to crisis communication to advertising campaigns.

Nonetheless we looked at how to monitor a certain hashtag. You start by setting up the keyword/hashtag in the project settings and choose “Hashtag Campaign” from the “IQ Apps”. From there you can set up a variety of parameters to comprehensively track your campaign.

Talkwalker lets you compare the performance of different hashtags. If you read the blogpost about pride month in June you might remember that I used both the LGBT and the LGBTQ acronym. Let’s say I wanted to find out which one is more commonly in use on Instagram and Twitter. 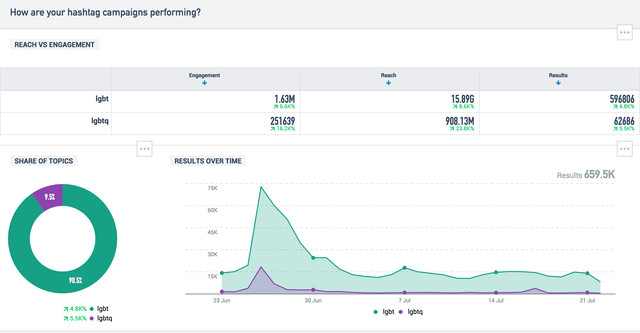 As you can see, LGBT is performing a lot better than LGBTQ, and you can also spot the spike in the days surrounding 26 June during worldwide pride marches. This kind of information lets you plan ahead and figure out how to time your hashtag campaigns around events in the coming year.

Historical hashtag data – at a price

Considering most hashtag tracking tools only offer the tracking of future posts, the main selling point for a lot of people will probably be that Talkwalker offers a 1-year view. However, this selling point is not a cheap one. The month view is included in the trial, but you only get data going back for a year if you’re ready to shell out €500 per month and commit for 6 months (that’s the basic plan).

Talkwalker is by far the most versatile tool we’ve tried and it has a lot of finer points that we haven’t even remotely explored. However, it is obvious that this tool is geared towards agencies who use social media analytics a lot more often and more extensively than just for a single hashtag campaign.

The service is still in beta (which is why I’ll forgive them the rather slow loading times for now). To get trial access you have to request a demo and wait for the Talkwalker support team to get back to you.

Other ways to keep track of your hashtags with IFTTT

Maybe you aren’t willing to pay for extensive hashtag campaign monitoring or you don’t want to bother going through the onboarding process you have with every new tool. Or maybe you just don’t need all the fancy analytics and are simply looking to collect posts that mention your hashtag.

In that case, IFTTT (Short for: IF This Then That) might do the trick for you. IFTTT is a popular service that lets you set up  automated processes, from sending an alert to your smartphone urging you to put on sunscreen if the UV rays hit a certain level to your Nest Thermostat at home turning up the heat when you leave work.

It works by connecting channels – services or devices – to your IFTTT account and then setting up so-called recipes that establish the basic rules. For example: IF I post a picture to Instagram, THEN post that picture natively to Twitter. It’s pretty easy, walks you through each step, and has tons of channels that you can connect.

You can create your own recipes, but in most cases someone else will already have set something up that you can use, like these recipes for collecting data on your hashtag: This hashtag monitoring recipe sends all tweets with a certain hashtag to a Google Spreadsheet. New tweets are appended at the bottom of the sheet.

You set up your trigger, in our case: All Tweets that use the hashtag #hashtagmonitoring: 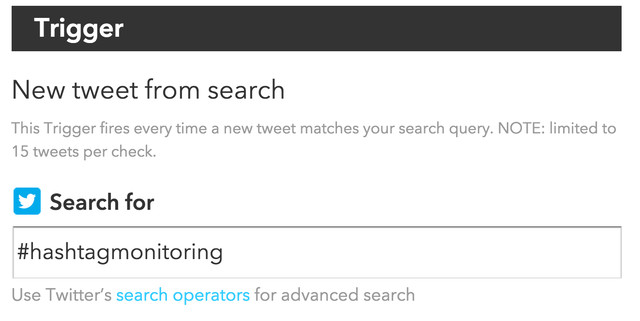 And then you specify the action: Send those tweets to a specific spreadsheet: 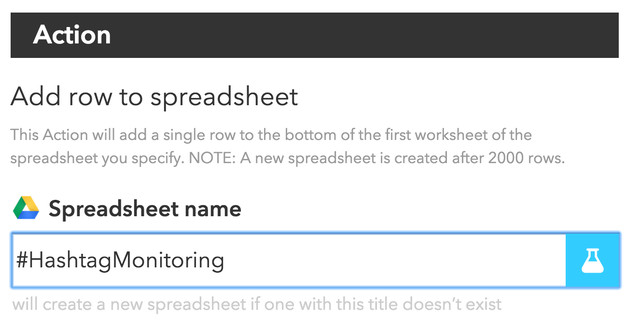 You can let the recipe run silently, but if you’d like to be alerted to all new tweets with your hashtag you can choose to let IFTTT notify you whenever the recipe runs. You can do the same thing with a recipe for Instagram posts. And if you prefer other services to Google Drive you could feed the posts to Evernote, Dropbox or some other app instead.

That’s it with the hashtag analytics for now. You should have plenty of tools to choose from – and there are, of course, many more out there than we could ever cover here. Let us know which tool you are using that we have or haven’t covered or if you’re creating any interesting new IFTTT recipes that we should know about.