Movie hashtags are a little bit different from brand hashtags. They don’t usually stick around as long as successful brand hashtags do. However, they can snowball much faster, since actors starring in them are excellent social media influencers. This is why a lot of studios are jumping on the bandwagon and using hashtags to create social media buzz leading up to a new release.

Film studios regularly create and promote hashtags before the release of a new movie. Both studios and actors use the hashtag on their own social media accounts to promote their upcoming movie. It is on Twitter and Instagram that their fans then pick up the hashtag, especially since using the official hashtag increases their chances of being retweeted by an actor they adore.

Given that many well-known actors already have a dedicated social media following, movie hashtags can spread like wildfire in the weeks leading up to a new release. After the movie has been out for a while, these hashtags die down again.

“Highway To Hellas” is a German comedy about a German bank employee coming to the Greek island of Paladiki to inspect the securities for a decade-old loan. Leading up to the film release the studio started promoting the hashtag #highwaytohellas. (Granted, the hashtag was already used back in 2014 when the novel the film is based on came out.)

They’ve also been running a Q&A (#AskHighwayToHellas) and been using the hashtag to raffle off premiere tickets – the competition involves feta cheese, of course 😉 The film’s sponsor Vodafone, who is live-streaming from the red carpet at the film’s premiere, even set up a social media wall and embedded it on their “Highway to Hellas” site. 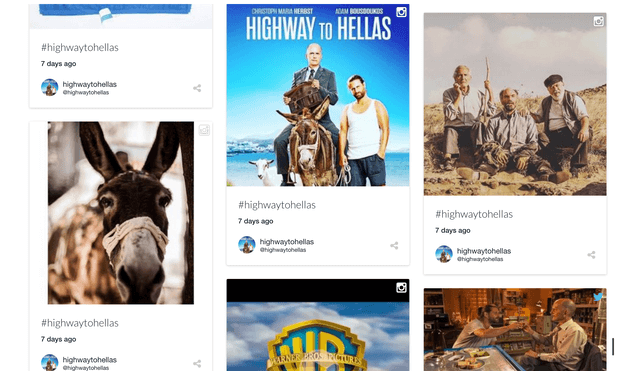 But the biggest boost Highway To Hellas has probably gotten from the tweets of one of its producers. Producer Matthias Schweighöfer happens to also be a well-known and well-liked actor in Germany. Even though he is not technically in the film, he has done much to help it along. By using #highwaytohellas on Twitter, promoting the movie, the raffle and the Q&A, he has created buzz for the film among his own followers.

“Miss You Already” is a movie about the lifelong friendship between two women, played by Toni Collette and Drew Barrymore, who go through some rough times when one of them finally starts a family and the other one gets cancer.

The movie studio employing the hashtag #missyoualready to create buzz for the film seems obvious since it’s literally just the movie’s title. However, #missyoualready is also a previously well-established hashtag.

But it is the former that makes the choice of hashtag work so well for the film, because people who use that particular hashtag are smack in the middle of the movie’s target audience. Everything the film stands for – life-long friendships between women who support each other through everything – was already all over Instagram and Twitter even before the movie was created. This has probably improved the reach of the #missyoualready hashtag campaign exponentially. It was the perfect breeding ground for the campaign:

Jess is Milly's friendship soldier! Tell us a time you supported your friend through a battle. #MissYouAlready pic.twitter.com/1xvgFXctMW

Usually we recommend using a hashtag that’s unique, but “Miss You Already” shows that sometimes it makes sense to use something that’s already established.

Which movie hashtags have caught your eye? Have you seen any inventive hashtag campaigns lately?