We’ve talked about famous hashtag highjackings and about what you can do if your hashtag gets hijacked. But not all hijackings are inherently bad. When done right and respectfully, brands can get good leverage by jumping on board of a currently trending hashtag. In that case, we’re talking about something called trendjacking.

There is, of course, an argument to replace the negative-sounding term “trendjacking” with “real-time marketing” as a more thoughtful version of reacting to what’s going on around us.

At the end of the day, whichever term you want to use, it’s all about reacting quickly to current developments in the world in order to make good use of it for your brand. One of my favourite examples of this is Oreo’s quick thinking during the 2013 Super Bowl blackout:

Power out? No problem. pic.twitter.com/dnQ7pOgC

What is trendjacking or newsjacking?

Trendjacking originally comes from newsjacking, the act of journalists taking advantage of a news story about to blow up. Similarly, trendjacking allows brands to boost their exposure by getting on board with a trend at the right moment. Brands aim to join into an already existing conversation and capitalise on the exposure that story is already getting.

The term newsjacking was first made popular in 2011 by David Meerman Scott in his book “Newsjacking: How to Inject your Ideas into a Breaking News Story and Generate Tons of Media Coverage”. 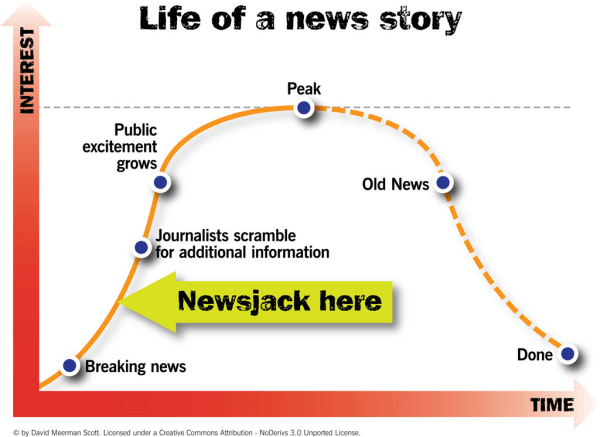 Like the graph from Scott’s book shows, the key is to notice when a news story or social media trend is about to go viral and to find the right angle for your brand to contribute content.

When done right, you can gain fans and followers for your brand. However, it’s definitely a polarising practice, as it can go horribly wrong as well. Like when Prince died and the British DIY chain Homebase thought it would be a good idea to use #RIPPRINCE to get their tweets seen.

BTW: What trendjacking definitely isn’t, is picking up as many trending hashtags as possible and stuffing them into your tweets. Don’t do that. It might get your brand seen, but definitely not in a good light.

Real-time marketing involves ad-hoc marketing efforts based on things that are happening in the world and on social media right now, instead of implementing long-planned marketing strategies.

You can spot potentially trending topics by keeping an eye on traditional news media as well as social media, by setting up Google alerts, or even by paying attention to conversations in everyday life, from the supermarket to the watercooler at the office.

The tricky bit of real-time marketing moves is that they have to be perfectly executed to work. You have to be able to react quickly, think on your feet, and still give a flawless performance that doesn’t look like it’s been quickly cobbled together.

The trending topic doesn’t have to be directly related to your brand. In fact, the real trick is to be able to connect something that’s currently trending to your brand in a believable way. The tie can be completely ludicrous — as long as the connection makes sense.

The ground rules of trendjacking

Before you start trendjacking, please consider a few important things to keep everything from blowing up in your face.

Do your research and tread carefully

I say this pretty much all the time, don’t I? But it’s really very important to know what hashtag you’re highjacking! Otherwise, you might end up like DiGiorno Pizza who tried to trendjack #whyIstayed. The social media folks at DiGiorno somehow hadn’t realised that #whyIstayed was a hashtag used by domestic violence victims who were sharing why it took them so long to leave their abusers.

How did this happen, you ask? The answer is pretty simple: DiGiorno’s social media team did not research the hashtag before posting and randomly jumped on a hashtag it saw trending:

A million apologies. Did not read what the hashtag was about before posting.

It should go without saying but don’t body-shame, don‘t be racist, sexist, transphobic, homophobic, ableist, etc. Problematic hashtags can go viral, but that doesn’t mean that you as a brand should jump on the bandwagon. 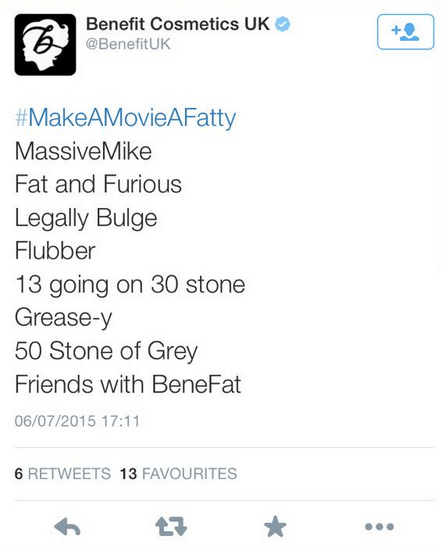 Makeup brand Benefit decided to jump on the hashtag #MakeAMovieFatty and deservedly caught a lot of flak from its followers for this body-shaming marketing content. They deleted their original tweet, but all of Benefit’s apology tweets are still online.

Stay away from RIP

I guess this falls under the “don’t be offensive” heading as well. But given how many brands unfortunately still fall into this trap, we might as well spell it out: For the love of whatever you believe in, do not try to capitalise on death! Not only is it a dick move — it will always, always backfire on you — as becomes obvious after seeing Homebase’s #RIPPRINCE disaster.

The most important part of real-time marketing is to not try to directly sell your product. One brand that knows this very well is smoothie maker Innocent.

Innocent has a habit of jumping on the bandwagon of trends like #PenguinAwarenessDay (January 20, if you would like to know) or even #ValentinesDay in a lovable cutesy way, often relying on language puns:

Forgot to buy a #ValentinesDay card? Here's a plan B. pic.twitter.com/4hgfCrL03t

Innocent’s real-time marketing works because the brand only cheekily alludes to its own products and rather focuses on the conversation it enters with the fans. The topics it pounces on are light-hearted and safe. That’s not to say that brands should never take on risky topics at all.

The Trump administration and its “alternative facts” are a serious problem in the current political state of the U.S. and the world. So it would stand to reason that trendjacking the hashtag #alternativefacts should be off-limits for brands for fear of backfiring, right?

Deutsche Bahn’s (German Railways) recent attempt at just that might have gone horribly wrong. But it didn’t:

The German tweet that got plenty of likes and retweets says: “Good news: the punctuality of our trains is at 120% today. #alternativefacts”

It worked because Deutsche Bahn went for a self-deprecating type of gallows humour. It’s funny because it wasn’t actually over-selling itself or pushing the product.

Meanwhile, Sixt Germany’s somewhat self-aggrandising tweet “There are better car rental companies than Sixt. #alternativefacts” falls completely flat — a fact that is reflected in the lacklustre number of likes and retweets. Sixt tried to obviously sell a product instead of joining a conversation.

The trick to a successful trendjacking is being fast yet still deliberate and thought-through. Even when there is not much time, brands should still take a moment to consider all potential outcomes and plan their real-time marketing move properly. When trendjacking a divisive subject, tread carefully. If you can detect even a whiff of potential disaster it’s better to leave it be.

It’s also important to employ a sense of humour and approach trendjacking with a certain amount of self-deprecation rather than self-aggrandisation. Be cheeky! Everyone knows that trendjacking is just another way for brands to get exposure — and that’s okay. Just don’t try to directly push your product.

So you want to dip your toes into trendjacking? Why not start easy by focusing on weekly hashtags first? This way you know in advance which hashtag you’re going to be jumping on board with and don’t have to work as fast as you have to with a spontaneously trending hashtag. It gives you a way to ease into real-time marketing before you move on to faster and riskier trendjackings.